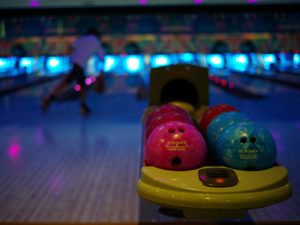 Oh, hi! So Philly Cheese Steak (btw, I’m apparently not the first person who’s called him this) and I went on our third date last night. Our second date, last Friday, was another winner. We went for Thai food at my fave place, followed by a walk along the canal, and capped things off with BeaverTails by the lake. I think most of you know by now I’m not being dirty when I say that. They’re actual things you can eat. Heavenly, I tell you.

Okay, back to last night. I suggested we do something fun and active, like bowling! Philly Bob Bogart was totally on board. (Bonus statistic: I’ve never lost a single bowling game in the history of my dating life). I might be a tiny bit competitive. For instance, I wore this shirt: 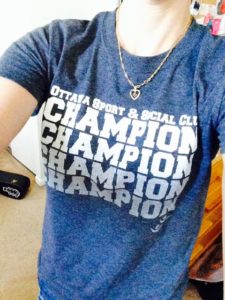 What? Just keepin’ it real, yo. 😉 Anywho, we played a best of three battle. My opening two games were a little rusty, but I still pulled off the big W. My third game was a blowout. For me. I won by like 40 points or something. But who’s counting? Philadelphia took the loss in stride. He was actually a very gracious loser, and he cheered me on every time I threw a ball. He’s a good guy, that Phil.

After our grueling match, we decided to go to the Byward Market and walk around. It’s one of my favourite places to hang in Ottawa. Punxsutawney Phil drove us in his hot-rod, Orange Crush. It’s cool when you’re driving around in a souped-up car. Lots of people stare at you in wide-eyed wonder, and they wave, and they give you the thumbs up. I guess Philly had worked up quite an appetite in the alley and was really hankerin’ for a burrito. As it turned out, we passed a newly-opened place called Zak’s Cantina.

OMG, you guys. This place is AWESOME inside! Like, I could actually live there. I could only find a couple pics of it online, so here’s a glimpse of the interior: 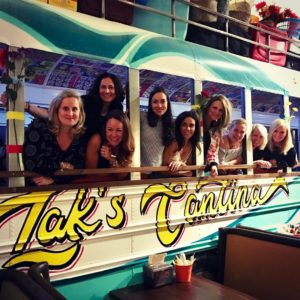 Yes, there’s a frigging BUS parked inside the restaurant, and you can eat in the bus, which, OF COURSE, we did! 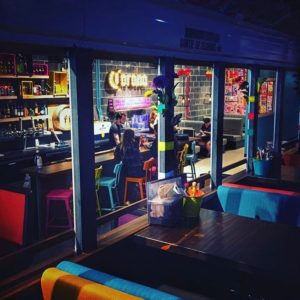 And one cannot sit in a bus without attempting to drive it…whilst wearing a sombrero. 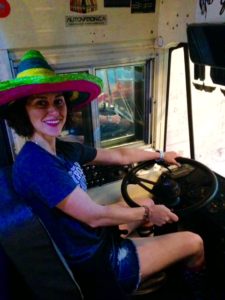 This is where our waitress found me. She thought I was funny. Phil-harmonic still thinks I’m très drôle, too.

He ordered his burrito and shared it with me. Then, there was one point when he thought I was tweeting the pic of me on the bus (which I was), but I was ALSO taking his pic. I’m a multi-tasker like that. And a giver, because I giveth the picture to all of you. 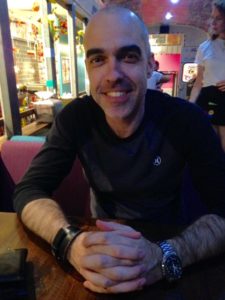 We hung out in the Cantina for a little while longer, and eventually headed back to the bowling alley parking lot. See, the bowling alley is in sort of a sketchy part of the city. So while we sat in OC, preparing for our goodbyes, this big white van pulled in, and a burly guy got out, tromped over to the passenger side, and held his hands out. Then a bottle popped out the window and a mystery liquid was poured all over his hands.

Philly Bob and I pretended we were on a stake-out and started writing their story. They’d just killed a man because he didn’t have their drug money, and they were washing the blood off the murderer’s hands…in a very unusual way. And the van stayed parked, and we thought they were thinking about killing us because we witnessed the whole hand-washing thing, but we realized that the orange-ness of his car might save us. Because that makes total sense. BUT THEN! A woman got out of the passenger side of the van holding some kind of wrapper that she tossed in the trash. The murder weapon was inside, we deduced.

Or possibly it was an empty ice cream treat wrapper and his hands had been sticky from the ice cream. Our story was way better, though.

That stake-out story led us into a conversation about scary movies and the sick, twisted minds who come up with the plots. Then, weirdly, my mind went to my ex and I said something about wishing he stepped on a nail. “A rusty nail,” Phil-anthropist supplied. “Yeah, yeah!” I said. “And it goes all the way through his foot. And he has to get a tetanus shot.” We had a lot of trouble with the word ‘tetanus,’ and then we laughed FOREVER when I made the remark that it sounds like someone trying to say ‘tennis’ with a stutter.

And then our stake-out became a proper make-out. Philly slipped a hand inside one of my knee-high socks, you guys! That’s practically second base! And I got goosebumps, from the leg petting and the kissing and so forth. I like him a whole really, really lot, and there will absolutely be a fourth date because I promised him I’m gonna teach him how to juggle.