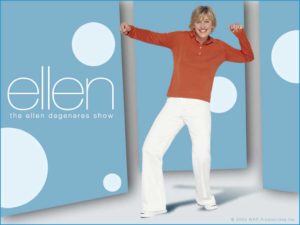 Yes, THE Ellen DeGeneres. Wondering how I “know” Ellen? Let me tell you about it!

Btw, I pulled this story from a blog I posted on LiveJournal in 2008. Recycling is a beautiful thing.

After a night filled with Gilmore, a few of us brave souls woke up at the ungodly hour of 6 a.m. and were standing in line at NBC Studios by 6:30 a.m. Why, you ask? Well, because, there are no guarantees. Even if you receive a voucher for tickets to the Ellen DeGeneres Show, you still have to go through the proceedings and hope you don’t get stuck with the riff-raff.

Three hours later, we were finally greeted by some crazy NBC cronies who handed out numbered cards to us and instructed us to return at 1:30 p.m. to line up for a SECOND TIME.

What did we do in the meantime? Collapse on the ground? Sleep at the hotel?? Hit the crazy NBC people with sharp objects??? Nope, we went to the WB Studios for our THIRD tour in THREE days!

Finally, we arrived back at NBC and waited another 1.5 hours for the doors to open. During that time, I passed out the seat numbers that we were given. Seats 62-68. Somehow I wound up with 68. That number meant nothing to me then.

When the doors opened and we were escorted inside, our party was seated in the third row from the top, and I landed the aisle seat! Yeah, 68!!! I immediately turned to my pals and said, “Oh my God! Ellen might come up this aisle!”

The audience warm-up included lots of dancing, of course, and a little karaoke action which I immediately participated in. Five of us formed a line and took turns singing a few lines from Lionel Richie’s ‘Hello’. Not the most ideal song for my voice, but I still sang with passion.

I think Ellen was watching backstage, and if my voice didn’t impress her, I’m certain that my dancing did!

So…finally the show started. Ellen came out, and I couldn’t stop smiling. She performed her opening monologue, which was hilarious, and then there was music, and it was Michael Jackson’s ‘Shake Your Body Down’, and my heart was pounding in anticipation.

She started up my aisle, giving people high fives along the way, so I instinctively stuck out my hand, hoping for some contact. She glanced up at me once and kept making her way toward me. At this point, I was delirious. I couldn’t feel my body.

Suddenly, she was in front of me, and she was dancing, and I was just so damn happy! Thankfully my body reacted and I started dancing with her, mimicking her movements and adding a few shakes of my own. It felt like at least two or three minutes had passed. In reality, it was more like 3.5 seconds. I was still smiling as she danced away, and I don’t think that I’ll ever be able to stop smiling.

Now, in case you need help with the math (I always do), next year will be our ten-year dance-iversary! I’ve put together a video featuring friends, family, colleagues, and teammates begging Ellen to dance with me again because, weirdly enough, they’re tired of hearing my go-to story. It’s currently being edited by a very qualified professional (a.k.a someone who can use a computer better than me), and, as I mentioned, it will be ready to view next week! Then, the social media blitz begins! Set your PVRs to record Ellen’s show next February 7th, my friends, ’cause I’m gonna be there! 🙂

Here's my newest furry fan! Have you read #LoveUnl

It’s #releaseday for #LoveUnleashed! Be sure to

Happy #TeachersDay to all my fellow educators! Now

Milkshakes at The Ranch in Havelock with my daddy!

Happy #birthday to this blockhead, er, I mean, my

I grabbed a copy just in time! Can’t wait for th

Y’all, I think I did it! I cracked the curly hair code! It only took me 38 years and 3000 different product combinations, but I finally hit on the winner! Thank you all so much for being on this journey with me. #grateful #fridayfeels #curlyhair