From Muskoka to Ottawa!

Back in 2007, as a ripe young graduate fresh from her first university degree, I worked as a Recreation Manager at Rocky Crest Resort in Muskoka, Ontario (a.k.a. cottage country). That was also the year I gave birth to the kidney stone that ate Tokyo, but that’s another story for another time. My duties at the resort included running all resort activities, hiring and training the summer recreation staff, supervising a daily kids’ camp, designing and implementing team-building events for corporate groups, and taking guests on tours of the lake in our pontoon boat. Needless to say, I was a very busy girl. But it was a pretty cool gig, I must admit. I mean, check this place out! 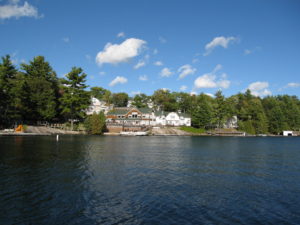 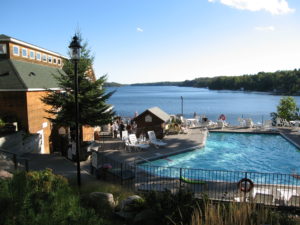 Right? I even got to live in one of the guest suites during my first two months working there. Super, super cool. I made a ton of friends with all the resort workers, and a few guests, too. As I mentioned, one of my duties at the resort was to take guests on tours of Lake Joseph in the resort’s pontoon boat. I had to, of course, get my boating license (or pleasure craft operator card), which I did on the first try (booyah!), and then I took a practice tour of the lake with a fully-accomplished boat driver…boatsman. Boater dude.

During one weekend, soon after I got the green light to drive the boat all by my lonesome, my family came to visit me at the resort: Mom, Dad, both sets of grandparents, my bro, and his then girlfriend. 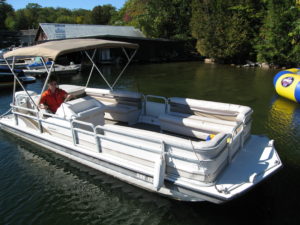 Here I am, pulling up to the dock like a boss! 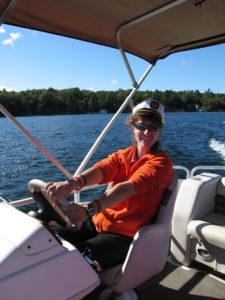 They call me Captain Julie. 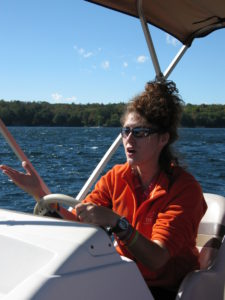 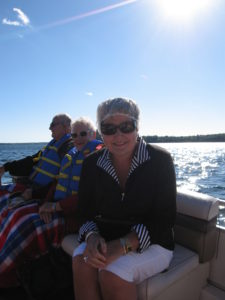 The sea was angry that day, my friends. Mom wore a shower cap ’cause the waves were so high. Cracks me up every time.

Here are a couple pics of my adorable grandparents. Aren’t they the cutest? Sadly, both my grandpas are in Heaven now, but my grandmas are alive and kickin’. 🙂 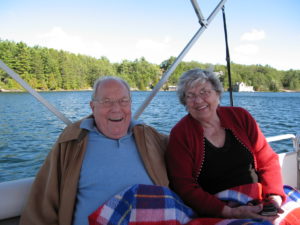 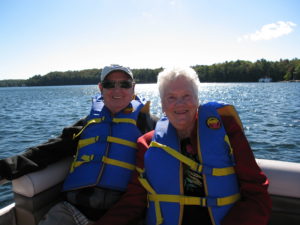 My family members were excellent guinea pigs, and they even gave me a tip after the tour! With one success under my belt, I felt confident I could do it again. The following weekend I had the chance to prove myself when a group of women, all sisters-in-law, were there to celebrate one of the sister’s big 40th birthday. I could tell right away that they were gonna be a blast to hang out with.

We hit the water in the late afternoon and things were going perfectly. We were laughing and sharing stories and having the time of our lives, and then…the boat stalled. In the middle of the lake. And it wouldn’t start up again. They thought it was hilarious and kept hoping the boat would drift closer to one of the multi-million dollar cottages on the lake so they could be rescued by whatever handsome young thing lived there. I was mortified. I had no idea what to do. THIS was not part of my training! My armpits were sweating. And then, by some strange miracle, the motor finally revved up again. I finished the tour with flourish, the ladies were tickled by everything, and they invited me out later that night for celebration drinks.

Resort guests come and go. You never really expect to see any of them again. But that was not to be the case with these special ladies. Rose (I’ll call her the head sister, since all the other women married her brothers), kept in touch with me. She sent me emails every once in a while just to see how I was doing and to fill me in on the goings on in her life. It was so nice. Sometimes we’d go a whole year without communicating, and then an email would pop up in my inbox and we’d start chatting again.

Fast-forward to this past weekend. Almost ten years later, my girlfriends came to Ottawa! Rose contacted me a few weeks ago to ensure I’d be here for the festivities. They planned to do all the touristy things, and I decided to join them. I’ve been living here for nearly three years, but I still haven’t been to all the cool places, or seen all the sights. We met at their hotel in downtown Ottawa, and it was like no time had passed at all. We hugged and laughed and recalled that wonderful day we met. After getting all the giggles out of our systems (at least temporarily), we walked toward the Parliament Buildings to take a bus tour of the city. It. Was. AWESOME! Here are some pics I snapped along the way: 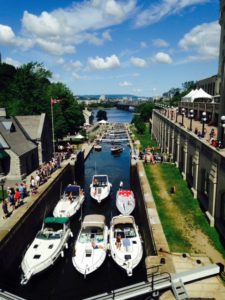 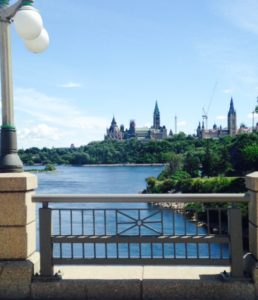 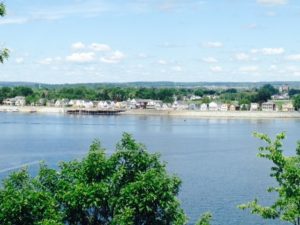 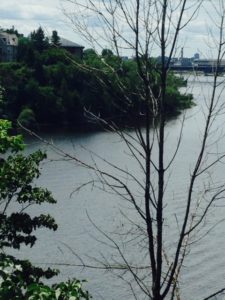 How beautiful is Ottawa? I still feel so blessed to call this place my home. FYI: The bottom pic on the right? If you look closely, you can see Mr. Trudeau’s house on the hill in the left corner–24 Sussex Drive. Not that I have the address memorized or anything….

The bus tour lasted a couple hours, then we walked along Rideau Street to see more sites on our way to the Byward Market, another one of Ottawa’s treasures. There, we grabbed a bite to eat, gabbed our hearts out, and capped lunch off with cupcakes! 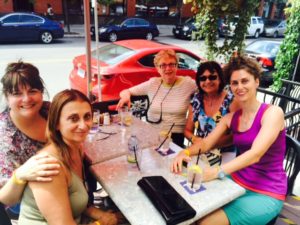 My gal-pals! From the back left, that’s Natalie, next to her is Isabelle, Chris in the top right corner, and Rose is next to me. 🙂 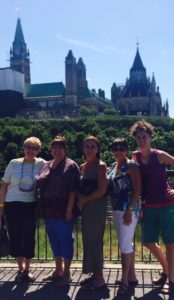 In front of the Parliament Buildings. I look like a giant.

When it was time to say goodbye, we all hugged tight and promised to make plans to see each other soon. Like, soon-soon. Before the next decade. 😀 I’m just so amazed and delighted to think that we forged such a strong friendship that day on the boat, one that I know will last all our lives. Thanks so much for reading, folks! Hope this post has inspired you to embrace new friendships…and to visit me in Ottawa (because I’m awesome). Hugs and smooches!